Do You Know The Actual Reasons Why People Get Married ???

Everyone gets Married, sooner or later depends. People console themselves by saying it’s our Destiny and everyone has to be in this situation despite their choice. It's so Romantic to think that everyone who Marries does so for Love, but that's not always the case.

We will show you the real picture & let you know about The Actual Reasons Why People Get Married.

These 4 people, mostly, nameless faces have defined a lot of what we do or wish to do. Fear of societal judgements, many people jump into marriages fearing that the society will judge them if they haven’t found partners to spend the rest of their lives with. The Chaar Log might be extended family or neighbours but the constant attention is enough to propel many into marriage.

There is nothing more fearful than seeing all batch mates and schoolmates getting hitched one after the other for this kind. As they wake up to a new day, there is another wedding to attend. The mere thought of seeing others settling into the “Happily Married Quota” makes this group frantically registered themselves across multiple matrimonial sites and agencies until they finally hit the right spot & get themselves married.

This is one of the most common reasons we came across. Very often, parents badly want to see their children seeking marital comforts. The quenching desire to see a tiny tot in the houses is another pressing issue. Coupled with all this is the worry that their kid may not find suitable partners as they get older. So parents force their kids to get Married & the so called kids have no choice but to say yes and have to sleep with someone they don’t even know. I was overjoyed to hear this. This category strongly believes that they have spent enough and more of their lives by themselves. They think they have reached a marriageable age not out of any external pressure but by themselves. The joy of starting a new life with someone they love / they have not met yet seem very exciting for them. You must have heard a saying – “Apne Pair Par Khud Kulhadi Marna” or “Aaa Bail Mujhe Maar”. LoL we just can’t stop laughing. 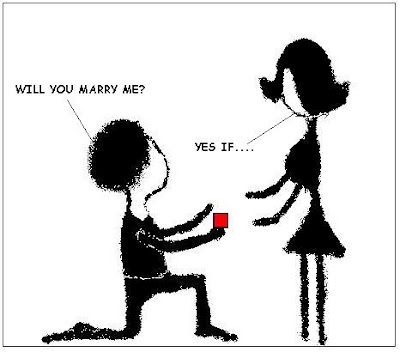 The Kundli has been known to throw different kinds of twists every time anyone talks about Marriages. Horoscope matching is a must before marriages in many of the cultures in India. The Funny part is when Some unfortunate souls have their horoscopes saying stuff like if they do not get married before a certain age, they may not find a life partner at all. Due to which we rely to those sayings, trust some Pandit’s future predictions (who can’t even predict his own future) & get ourselves hitched. Even the most celebrated couple Abhishek Bachchan & Aishwarya Rai were seen performing a lot of rituals to overcome horoscope issues.

6) “They’re going to Fix my Marriage with Someone Else”

The Age-Old Lover’s dilemma. They love someone while the family likes someone else. In the event of a clash of clans, the only solution for many couples is to quickly marry their loved ones or let go of them. The latter becomes too painful a thought to happen but only few get successful in marrying their loved ones, Coz not every parent allows their child to get married by their choice.

After asking many married people, This was the most surprising lot. They did not have an answer themselves. They just knew that they would get married but had no clue as to why. They thought for over 5 minutes but had no answer except for a grin plastered on their faces along with a look of cluelessness! There would of course be a plethora of other reasons for people in India to get hitched. While some bow down to parental pressures, others marry on their own volition or to explore a new exciting life.

Whatever be the case, here wishing every one of these nameless faces, a very happy married life and to all singles whenever they get Married ! We just wish you don’t have to face these situations and you take this big decision in your full consciousness, willingness and with your loved ones. :-) :-)

Not a member? Register Here